PUT YOUR MASK ON BEFORE HELPING OTHERS…

Those of us who travel react differently to the Flight Attendant Safety Instructions.  Some ignore them, some sleep through, the rare person actually pays attention and the multi-million miler has heard it thousands of times.  That doesn’t mean that we don’t listen still and take it seriously.  Many years ago I actually had a flight abort a takeoff and ended up going down the emergency chute! 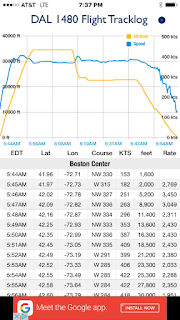 I had been upgraded to First Class five days earlier and chose seat 2D to get a snooze as the flight was to depart at 540 am.  The graph to the right (www.flightware.com) shows we took off about 545 am, right on time.  The pilot brought us to 36,000 feet about 15 minutes later.  I was dozing off when my ears started popping, seriously popping.  This was sometime around 615 am.  I had to keep swallowing.  The plane was level so that meant one thing – depressurization!  Sure enough the Oxygen masks dropped down!

Well, even after 3 Million miles I must admit my heart raced a bit but I remembered the instructions on how to put my mask on.  My seat mate did too.  The other 10 First Class passengers did not!  Maybe they think hypoxia is a joke.  Maybe they can’t spell hypoxia?  If we were going to be a lawn dart I sure wanted to see it end!

Anyway, the pilot headed to lower altitudes (24,000 feet) pretty quickly while we were told it was a problem with the A/C Unit (maybe a valve?).  You can see the descent rate and final altitude below.