Windshield Glass Reflections - How to Remove Them

"I do a lot of windshield defrost testing at different temps. And I wonder is there any way that can keep from having the camera and myself reflected back into the images."

Glass is about 15% reflective in the 8-12 micrometer waveband. If you are directly facing the windshield, you will inevitably get a reflection of yourself and the camera. I'm sure you have seen this. If there are hot objects or objects with temperature variations above the vehicle, that might make things worse. They will reflect off of the glass. If possible, you could place a high emissivity piece of material above the windshield so that all reflections off of the glass are uniform. A large piece of cardboard or a blanket might do well.

This way, you will observe only temperature changes, not patterns due to non-uniform reflections.

Another option is to use image subtraction techniques (you will have to have software which supports this, such as FLIR ThermaCAM Researcher). 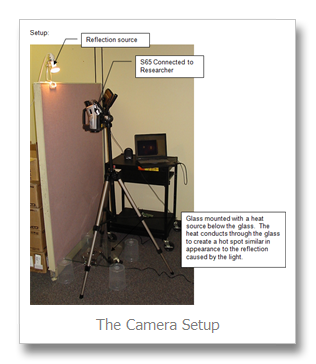 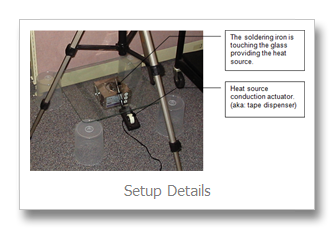 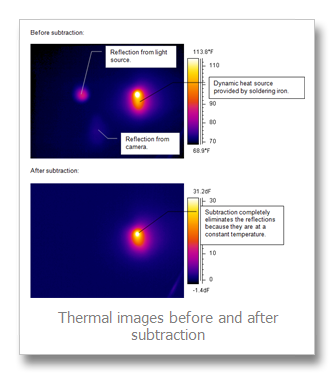 New from the Infrared Training Center, this tutorial will show you how to operate the essential features of Fluke SmartView® .
This course is also for ITC-trained thermographers with Fluke thermal imagers who require guidance on using the software to complete the Field Assignment portion of their infrared certification.
After taking this course, learners will be able to:
Fluke SmartView® Course Homepage Link
Posted by Gary Orlove at 9:33 AM 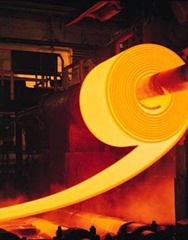 A technique called the Wedge Method or Roll Nip method is finding increased use in measuring strip temperatures in the metal production/processing industries as it is touted as providing the dual advantages of appearing to be independent of the material emissivity and the presence of any ambient reflected radiation. Basically, the concept is quite simple: Picture a horizontal steel strip that contacts and at least partially wraps around a large roll, usually a deflector roll used to change strip direction or a bridle roll used to set strip tension. Aim a radiation thermometer almost parallel to the strip into the gap formed between the roll and strip tangent point, as deep as you can go. (Viewing at an angle from the side is fine). This gap, as the claims state, can be treated as a blackbody with an emissivity of 1.0 (see Figure 1). Hence, you don’t have to worry about ambient radiation as reflectivity is 0.0 and you don’t have to worry about changing material emissivity. This is partly true and partly wishful thinking.

Blackbody conditions exist for a cavity if and only if all sides of the cavity are at the same temperature. If the roll being used has a very low thermal mass (heats up easily) and there is a large wrap around the roll and sufficient strip tension to allow heat transfer to occur between the strip and the roll, then the roll will heat up to near strip temperature over a time period, but because the roll has natural convection, conduction and radiation losses, the roll can never quite reach the strip temperature. Emissivity never reaches 1.0. It should be obvious that if the strip abruptly changes temperature, which can happen with strip thickness or furnace temperature changes, it will take time for the roll to change temperatures. Heat transfer between the two can take quite a while during which time the temperature reading from the wedge system will be quite inaccurate. So, if a system is designed well, with a major roll wrap, low thermal mass roll, sufficient strip tension and steady long term operation (no major changes in strip temperature), this method can work as claimed (except that emissivity must be set somewhat lower than 1.0 to compensate for the roll being at a slightly lower temperature than the strip).

Given human nature, however, I’ve seen numerous instances where folks have not understood why the wedge method can work and who have misapplied it. Believe it or not, I’ve seen an instance where a so-called wedge method has been applied with zero roll wrap, with the strip simply passing over a support roll. And this system was (unfortunately) designed by the equipment provider who should have known better. I would guess that a majority of wedge method applications that I’ve seen have been poorly designed, with little attention paid to the amount of roll wrap or roll material and with little understanding of what occurs during changes in strip temperature.

There is a modification to the wedge method that can provide a significant improvement: Mount a second Radiation Thermometer to monitor roll temperature and compare this reading to that of the wedge RT. Using a PC with input and output cards (and most any older PC will work), abrupt deviations between the two readings which occur as strip temperature changes can be used to correct for errors. If accuracy is desired, it’s well worth the extra expense. You get what you pay for.

InfraMation 2018 is Headed to Austin, Texas

InfraMation, the world’s leading IR training experience and thermal imaging conference, is headed to Austin, Texas September 11-14, 2018.  Join other thermography experts from around the world at the downtown Hilton Austin to learn the latest thermal imaging techniques and applications while making valuable connections.

Learn more and register at www.inframation.org

The best deals are now available for a limited time with our Super Early Bird options that include among other items a FLIR E8 thermal imager, the chance to win a FLIR E95 infrared camera, a FREE ITC Certification renewal, and up to $800 off your entire registration.

More details coming soon including a Call for Papers for those who are interested in sharing their knowledge and experience with other industry professionals, plus sponsorship and exhibiting opportunities too.  Until then, follow us on Facebook (www.facebook.com/InfraredTraining) and Twitter (www.twitter.com/ITCInfrared) with the hashtag #inframation18 for the latest conference updates.

Posted by Matt Schwoegler at 7:30 AM