All About the Timing: Insulation Inspections and Solar Loading

The effects of the Sun on the surface of a building can make inspections quite challenging for thermographers looking for missing insulation.  The transient conditions created by solar loading not only mask infrared patterns on the exterior, it also impacts the thermal signature on the interior, perhaps leading one to believe (in the right conditions) that a wall appears to be uninsulated, when in fact it is insulated.

To capture this, I recently set-up an infrared camera at home to monitor thermal changes on a south facing wall from the interior. The plan was to image the pattern reversal that occurs on an interior surface when the Sun heats the exterior up to a point where the direction of heat flow in the wall reverses, even though the air temperature remains colder outside. 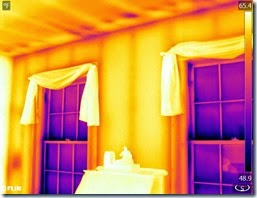 I programmed the camera to record an image every 15 minutes starting at 7:00 a.m. Conditions at the time were ideal to check for insulation problems in a wood-frame building given the interior air temperature of 68˚F (20˚C) and an exterior air temperature of 33˚F (0.5˚C). The first image taken, seen here on the right, shows a wall which appears to be mostly well insulated (warm cavities and cooler framing). As the day progressed, however, the situation changed dramatically. 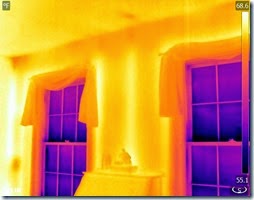 temperature (47˚F / 8.3˚C) was still quite a bit cooler than the interior, the studs in the exterior wall were showing up warmer relative to the insulated cavities (second image, right); a pattern that appears to indicate the wall is actually uninsulated. So what’s happening?

Well, it is the surface temperature, not the air temperature, which is driving conductive heat transfer through the wall. This temperature difference between the inside and outside surface is what brings out the thermal bridging patterns we are accustomed to seeing with an infrared camera. However in this case, right around midday, the exterior wall surface temperature was averaging about 120˚F (48.9˚C), as seen here in the third image below right, even though the outside air temperature at the time was 45˚F (7.2˚C). 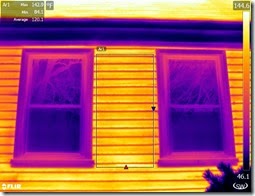 There were times even during the afternoon when the thermal patterns of the framing were almost indistinguishable from the insulated cavities because both the studs and the insulation were near the same apparent temperature on the surface of the wall, seen in this example captured at 2:30 p.m. (fourth image, bottom).

So, the time at which you arrive to inspect the thermal boundary for insulation issues really does matter. Imagine you are a thermographer that did not show up until later in the afternoon on this particular day? As these results demonstrate, not the most desirable position to be in and it is why inspections in cold-weather are best done early in the morning, or on a cloudy day, when conditions are more steady state than transient. 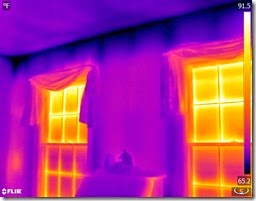 Posted by Matt Schwoegler at 7:08 AM