by Ron Lucier, ASNT NDT Level III
They are several types of steam valves:
How you inspect them is different, but first, a little bit about steam. When you boil water at atmosphere it will reach 212˚F (100˚C).  Put it in a pressure vessel and continue heating, adding another 960 or so BTU’s and it becomes steam, but still at 212˚F (100˚C).  Pretty useless, though.  Keep heating it and the pressure goes up.  That heat is called enthalpy.  That’s the energy steam turbine blades extract via pressure drop to make power and it’s an important concept in steam valve leakage diagnosis.

Isolation Valves
Steam is hot and many valves and lines are insulated.  This is a problem for inspection.  I used to have holes in insulation cut anywhere from 10 to 16 “pipe diameters” away from the valve, on the bottom of the pipe and use high temp black paint.  I would also cut a hole in a convenient location upstream of the valve and within a day of startup establish a baseline. 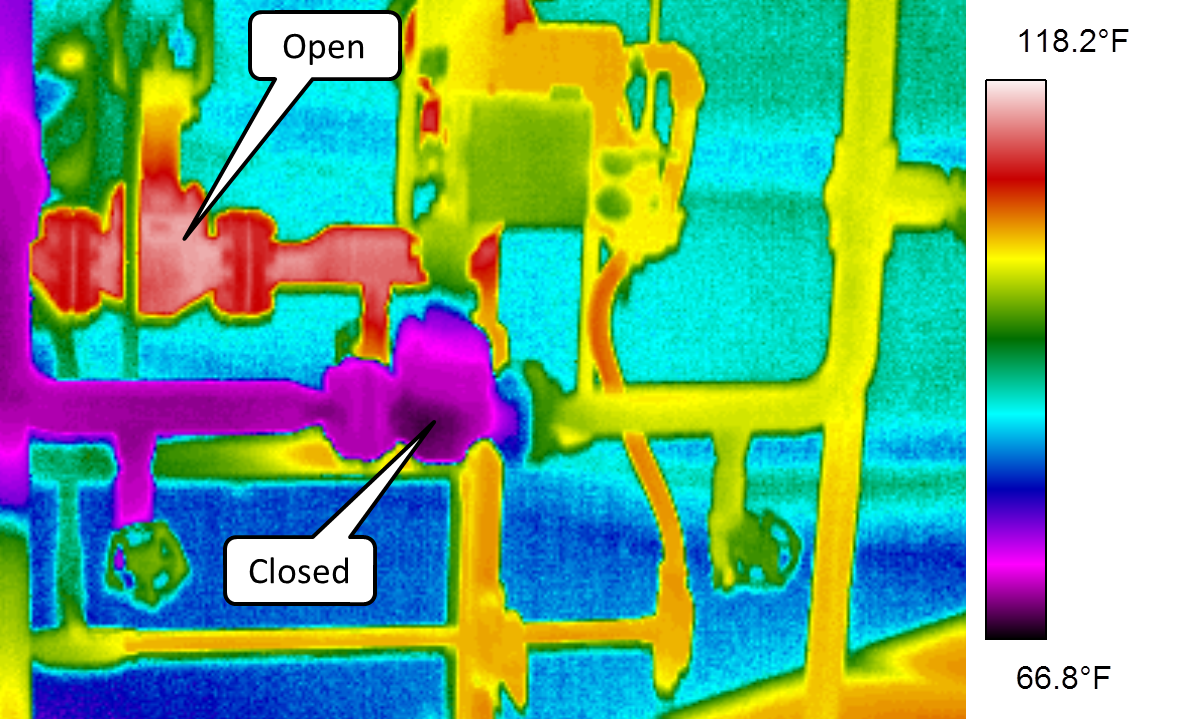 Why 10 or 16 pipe diameters?  You use 16 if the line dumped into the steam condenser, 10 if it did not.  This is because of the latent heat of vaporization.  When the steam leaks it may actually superheat just past the seat of the valve and you need time and distance for it to condense into water.  You then need time for vaporization (evaporative cooling) in the pipe to establish a delta T.
These are the easy ones.

Control Valves
There are many different types of valves used to control the flow of steam.  Diagnosing a bad steam control valve with an IR camera boils down to getting a baseline IR image of the entire valve uninsulated from both sides.  Ideally the valve will be painted/corroded/rusted but this is likely not the case.  I’m not aware of anyone with success in diagnosing this type of valve, but perhaps a reader could chime in with their input and experience in the comments below.

Non-Return Valves (NRV)
An NRV is like a mechanically actuated check valve.  When an emergency arises at nuclear plant for instance, they may have to dump megawatts of heat from the reactor on a continuous basis through the steam generator (the heat exchanger between the primary and secondary systems and what actually generates steam).  These are huge valves: 30” to 48” (76cm to 122cm) in diameter.  The main issue is they aren’t intended to be used except during emergencies and during a shutdown process.  The NRV prevents back flow and can act as an isolation valve too.
Because the discharge pipe is so huge, and the volume of hot steam near 550˚F (~ 288˚C) is so large, there is a warming line around them.  This means there is constant leakage into the pipe past the valve!  If you did not know this you would think every NRV was leaking!  This is done by design to prevent water hammer.

Dump a couple hundred thousand pounds of steam into a cold pipe and that steam condenses into water. The water can tear weak welds apart and explode into the plant, injuring or killing people. I saw the results of a water hammer once when one of my fellow engineers forgot to put a bypass line into service around a control valve.  Luckily the pipe didn’t fracture (the line was water already) but the 30” (76cm) line pulled four 36” (91 cm) Hilti bolts and it’s baseplate out of the concrete wall!  We calculated a pressure spike in excess of 65,000 psi.  Suffice to say, he wasn’t my co-worker for much longer.

NRV inspection becomes extremely difficult because you have to monitor the leakage past the partially open bypass valve and the bottom of the NRV discharge line.  Cut a hole in the insulation on the bottom of the pipe before the point that the bypass line enters as long as it is 10 pipe diameters away (these can discharge to atmosphere).  Establish a baseline and monitor weekly.

Safety Relief Valves
Primary over pressure protection devices on any pressure vessel are the easiest to inspect.  By code they have to be uninsulated.  By practice I always recommend greyscale, red isotherm, and look for vertical isotherms on the discharge pipe.  Here are two thermograms illustrating this: 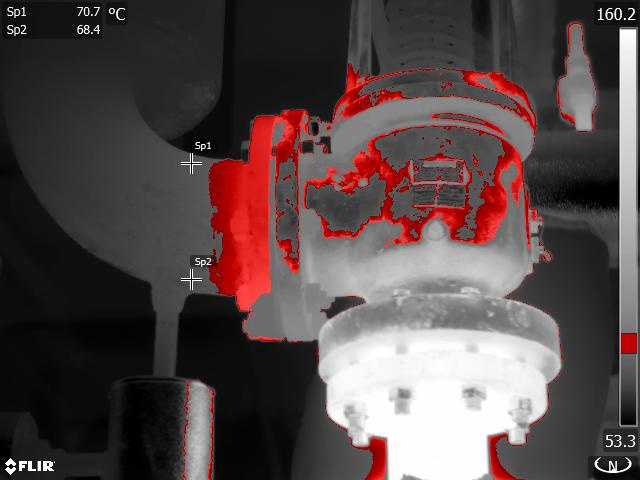 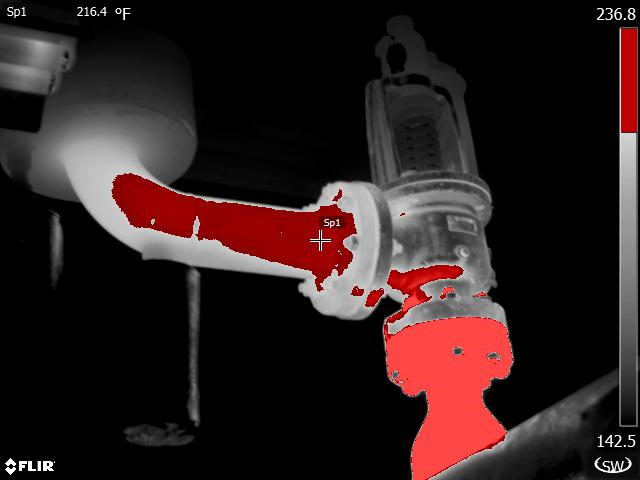 In this case here, it’s pretty obvious that it’s the one on the right which is leaking.
Steam is expensive to make. Therefore steam leaks are not only damaging, they are potentially destructive and always expensive. An IR survey locating steam leaks is one that is locating money leaks!